Great Press and Scores in the latest Wine Spectator!

The State of Washington’s Wines

Malbec, Chardonnay and more add dimension to a landscape dominated by Cabernet and Syrah
Issue: December 31, 2015

…Other than wines from K and Cayuse, head-turning bottlings from Walla Walla vineyards
include wines from àMaurice, Gramercy, Proper, Reynvaan and Saviah, along with
Cayuse proprietor Christophe Baron’s two other labels, Horsepower and No Girls.
Among the top-rated Syrahs from the rest of the state are the sleek Syncline Syrah
Yakima Valley Boushey Vineyards 2013 (94)….

Washington is in the spotlight with this selection of reds and whites, including both varietals and blends. A Syrah anchors the high end of the list, reflecting the quality of that grape in the lexicon of Washington wines.

Did you see us in the Wine Spectator?

James and Poppie were featured in the December 15th, 2011 issue of the Wine Spectator. Named a “New Face of Washington Wine”

Striking Out On Their Own
“James and Poppie Mantone met while working at LaVelle Vineyards in Oregon’s Willamette Valley. They married and, enamored with the wide range of wines possible in  Washington, bought a vineyard in the Columbia Gorge AVA. Their most impressive wines so far are Syrahs made from  grapes purchased from the warmer areas of Red Mountain and Horse Heaven Hills. The winery is named for the  towering walls of stratified rock that rise above the Columbia River.”

A brooding maelstrom of dark fruit and rosemary, finishing with sweet espresso notes.

Velvety, with dark berry and floral flavors bursting through the firm tannins.

Bright and jazzy, brimming with cherry and currant fruit character that plays against lively acidity and refined tannins, lingering effortlessly. This has the nerve and balance to go the distance. Drink now through 2021. 145 cases made. –HS

Broad and spicy, but not heavy, dripping with plum and currant fruit and sneaking in hints of licorice and roasted meat as the finish lingers enticingly against modest tannins. Drink now through 2019. 160 cases made. –HS

Fresh and inviting, relatively light-footed and open-textured, with cherry and balsamic flavors that dance deftly into a fine-grained finish. Drink now through 2018. 362 cases made. –HS

Dense and focused, with a chewy texture to the black cherry, floral, loamy earth and white pepper flavors. A bit aggressive now, but should improve with cellaring. Grenache, Mourvèdre, Syrah, Counoise, and Carignane. Best after 2014. 420 cases made. –HS

Dark, earthy and peppery, with a distinctive smoked paprika note around black currant flavors, finishing with firm tannins. Best after 2014. 500 cases made. –HS 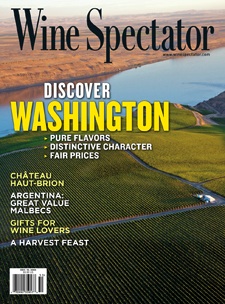 Harvest is the most nerve-racking time of year for winegrowers. After a long season of tending the vines, it’s time for the frantic rush of picking and crushing. The chances of mishaps are high (see below). But two wineries, one in Washington and one in southern France, are dealing with an unexpected problem-someone stole their grapes right off the vines.

Police in eastern Washington are looking for an estimated 1.25 tons of Mourvèdre stolen from Grand Rêve Vineyard in Kirkland. According to co-owner Paul McBride, the theft took place sometime between Sept. 15 and 20, less than two weeks before harvest. “James Mantone of Syncline Winery, who was scheduled to receive the fruit, inspected the vineyard on Sept. 21,” said McBride. “The outermost row was left unpicked, to mask that the inside fruit had all been taken.”

McBride has offered a $5,000 reward for information leading to the apprehension of anyone involved in the theft, and speculates that the culprit knows wine since he or she ignored other grape varieties growing nearby. But the pilferers picked too early. “If these guys would have waited 10 more days, the flavors would have been more developed, richer, riper, and they would have made a better wine from it,” co-owner Ryan Johnson told a local NBC affiliate. “If you’re going to steal my fruit, at least do it at the right time.”

Shortly after the Washington heist was discovered, Languedoc grapegrower Roland Cavaillé found that 30 tons of his Cabernet Sauvignon had been swiped. The thieves apparently worked by the light of a full moon at his 5 isolated acres in Villeneuve-lès-Béziers, on Sept. 25. “They used a harvesting machine. This means two people would have been enough,” Cavaillé told a French newspaper. At press time, police had no clues beyond the tracks left by the harvester and a truck.