A Two-Wheeler Tour of Wine Country 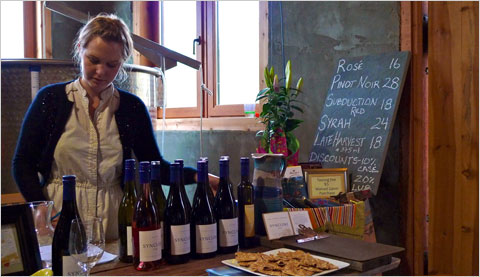 Nora Mounce handles the tasting counter at Syncline, a decade-old winery in the Columbia River Gorge. (Matt Gross for The New York Times)

OH, it’s not too hilly, said the woman at Syncline Wine Cellars when I called for directions from the Lewis and Clark Highway, somewhere southeast of Bingen, Wash. Just bike east to the Klickitat River, she said, turn left, and you’ll be there in no time.

The Columbia River. (Matt Gross for The New York Times)

I was skeptical. To my right was the Columbia River, wide and as steely as the clouds above. To my left, a sheer rock face, behind which rose yet more hills — the hills that led to my ultimate goal, three promising wineries in the Columbia River Gorge. Back in Oregon, the wines, particularly down in the Willamette Valley but also along the Columbia, were well-known, easier to reach and, thanks to a decade-plus of buzz, not exactly affordable.

But here in Washington, I’d been told at numerous wine shops, were great undiscovered values, and so I set out to visit some of the wineries the frugal way — by bicycle.

This plan quickly hit a few snags. The rented bike from Clever Cycles (908 Southeast Hawthorne Boulevard, Portland, Ore.; 503-334-1560; www.clevercycles.com; $100 a week with panniers) was a stately three-speed, perfect for cities but underpowered for hills. Then, after I had picked as my base the town of Hood River, Ore., I discovered that bicycles were banned from the bridge over the Columbia. Oops!

Luckily, the local people were friendly. I waited less than a minute at the bridge entrance before a pickup pulled over to offer a lift across the water. From there, it was a 14-mile bike ride along the Lewis and Clark in chilly intermittent rain, with trucks whizzing past. I didn’t mind. At times, I stopped just to admire the interplay of cliffs, water, grass and trees, and, at a rest stop, to learn the landscape’s geological origins.

Fifteen million years ago, a placard explained, volcanoes in eastern Washington and Oregon flooded the valley with molten andesite and basalt. Thirteen million years later, the Cascades erupted through those rock layers. Finally, as the last ice age wound down, roughly 15,000 years ago, an enormous lake in Montana breached its glacial dam, and the so-called Missoula Floods drenched the Columbia basin, reshaping the land once again.

What this created in the Columbia River Gorge was a liminal zone where thick clouds from the coast are halted, the dry heat of the high desert is cooled, and earth and stone of wildly different ages and makeups are blended — a unique terroir for making wine. 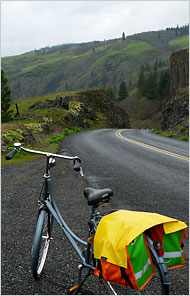 It’s also a terroir to challenge the thighs of amateur cyclists. The last mile to the wineries was unrelentingly steep, and I walked until at last the road leveled out into gently rolling farmland. There, at last, was my first winery, Cor Cellars (151 Lyle White Salmon Road, Lyle; 509-365-2744; www.corcellars.com), opened in 2003, a year before the gorge was designated an American Viticultural Area by the Treasury Department. The grounds were spare, unused barrels stood in the gravel driveway, and the tasting room was a narrow cement-floored space warmed by a cat named Catastrophe and a signed Jasper Johns poster. As at all the wineries I visited that Sunday, there were almost no vines — just two small half-acre plots. Though grapes are grown in the gorge, the wineries I visited were first trying to perfect their products by using local and slightly farther-flung fruit before they invested in their own vineyards.

I was up about as high as I could go, so I coasted three speedy miles down to Syncline (111 Balch Road, Lyle; 509-365-4361; www.synclinewine.com). Founded in 1999 and named for a series of 300-foot cliffs on the Columbia, it’s one of the most established wineries in this region, with a warehouse made from recycled computer packaging and an actual employee (not the owners!) tending the tasting counter. Nora Mounce was her name, and the glasses she poured were very sophisticated: a subtly spicy syrah, a late-harvest viognier dessert wine that had me swooning. My favorite was the well-balanced 2007 pinot noir, whose underlying funk captivated me.

At $28, it was also a sign that nothing stays undiscovered — or affordable — for long.

Hood River’s multifaceted climate is a little like Sochi’s — only without palm trees. Popularized as a windsurfing destination in the 1980s, this waterfront town in the Columbia River Gorge is blessed with mild to balmy temperatures nine months of the year, while nearby Mount Hood never runs out of snow. The result is an outdoor adventurer’s playground, and the saying “the Gorge is my gym” has inspired a blog of the same name, featuring daily wind and snow reports. The ultimate workout is the hat trick — a sport on snow, water and earth in the same day. It could be ski, paddleboard and bike; or snowboard, windsurf/kiteboard and hike. Or perhaps Nordic ski, white-water kayak and rock climb. And don’t forget fly fishing for steelhead. Once you’re hooked, the hardest part is the decision.

Sleep in, and then head to Egg River Cafe for a full breakfast of huevos rancheros ($11), omelets ($10), skillets ($10 to $12) and a waffle sandwich topped by an egg and filled with bacon or sausage ($11). This family diner with organic eggs and coffee and mural-painted walls is located above town with views of potentially volcanic Mount Adams.

Continue your well-deserved lazy Sunday on a wine-tasting tour in Lyle, Wash. The Evergreen State is a mere five minutes across the old-fashioned, vertical-lift White Salmon Bridge, and the Memaloose Wines tasting room is 15 minutes east past fascinating geological features and expansive river views on the Lewis and Clark Highway. Try Memaloose’s esteemed cab franc ($25 a bottle) made from Columbia Gorge AVA grapes. Next, turn up Old Highway 8 and stop at COR Cellars, where the owner Luke Bradford will tell you about his quest to make the perfect lower-alcohol, higher-acidity malbec ($28 a bottle). Farther on, Syncline Wine Cellars was founded by a Mantone husband-wife team and named for a nearby geological feature, the Bingen Syncline. On the way back, don’t miss Domaine Pouillon’s artisan wines from Rhone variety grapes. All four tasting rooms are open weekends from around 11 a.m. to 6 p.m. Just remember to sip and spit as you have to drive back across that narrow vertical-lift bridge to Hood River, where you can continue the tour at a number of Oregon wineries including Springhouse Cellar, in a 1920s fruit cannery, and Viento, on the western edge of town.